He was just a boy, drinking blackberry wine with Arya Stark but his dud performance proves the TV behemoths fondness for bland musicians. Still, at least the ditty he warbled was better than Galway Girl 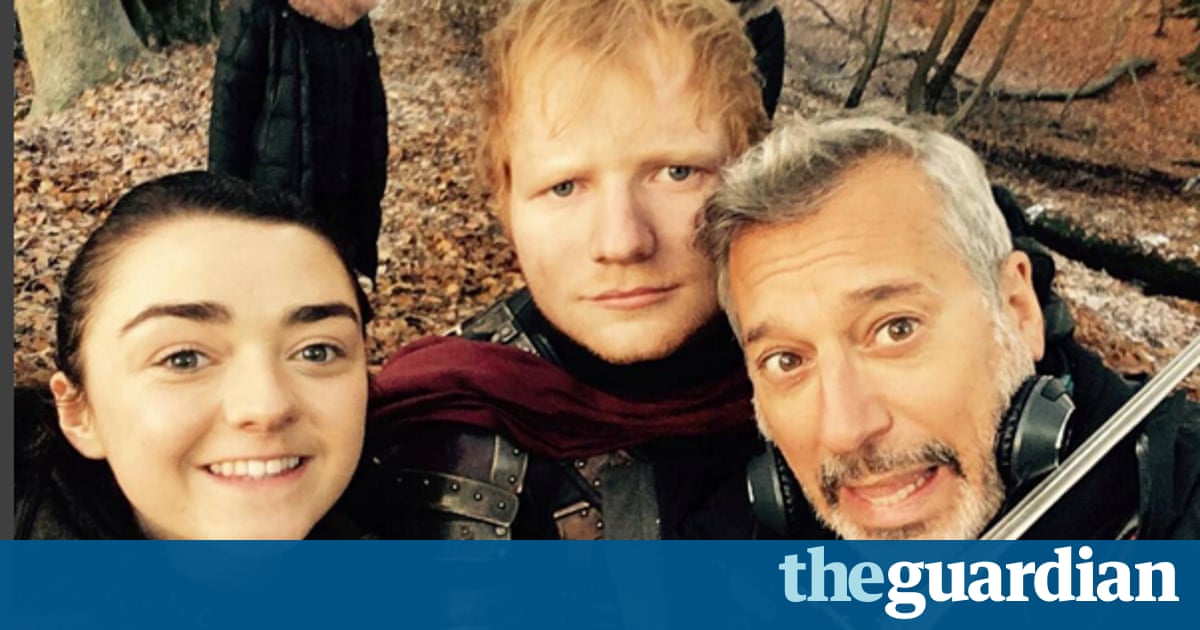 Now that Game of Thrones is deep into uncharted territory, roaring off beyond the printed page, the biggest talking points of each new episode should be moments we hadnt seen coming. They should be twists and turns that exist within the shows one-of-a-kind hinterland, caught somewhere between George RR Martins design and his eventual publication date.

And yet, at least judging by chatter online, the biggest moment from the Game of Thrones opener was one wed known about far in advance. Thats right: the Ed Sheeran cameo.

Because, sure, the ominous march of the White Walkers was terrifying. Sure, it was satisfying to see Daenerys hole up near a stockpile of dragonglass, putting her directly in Jon Snows line of sight. And, yes, the cold open where Arya Mission Impossibled her way into the Riverlands was cool, especially since it seemed to reveal the existence of latex in ancient Westeros. But these were just the inevitable playing-out of beats that had been put in place at the end of the last series.

No, it was the appearance of Ed Sheeran, known about since March, that really set the episode apart. Story-wise, his scene was inessential: he was just a boy, eating a rabbit, who happened to be chanced upon by Arya Stark. His men passed blackberry wine and told stories about the futility of war and the importance of kindness, which Arya probably needed to hear after her interminable stint being bashed into a callous by the Waif. Given the doomy portents of the rest of the episode, the scene was a nice breather. But thats it.

Nor did Sheeran do an awful lot. After singing a go-nowhere campfire song that, if nothing else, was better than Galway Girl and after getting a heros closeup for his big line Its a new one he mainly just sat next to Arya and reacted. He shifted his weight a couple of times, he passed food and drink to people and he very occasionally mumbled in agreement. That was the extent of it. Which doesnt bode well for Sheerans plans to make an 8 Mile-style origin film about Ipswich, unless he has his heart set on an experimental piece about a protagonist who mainly just smiles and nods at things other people have said.

Taken purely on sight, Sheerans much-heralded Game of Thrones appearance was a dud, bookended by two far more important and, thanks to The Hounds angry dismissal of topknots, funnier scenes. However, it did bolster a theme that has been slowly building over the years: Game of Thrones fondness for insipid musicians. In the third series, Coldplays Will Champion turned up to play The Rains of Castamere. In the fourth, Snow Patrols Gary Lightbody performed a song for Roose Boltons men, and Sigur Ros played at the Purple Wedding. Game of Thrones loves a bland, mass-market musician so much, in fact, that when the time came to cast Bronn, they literally went out and hired one of Robson and Jerome.

So Sheerans appearance puts him squarely in this lineage. In truth, it wasnt a particularly indelible appearance, but lets look on the bright side. At least it wasnt Justin Bieber.